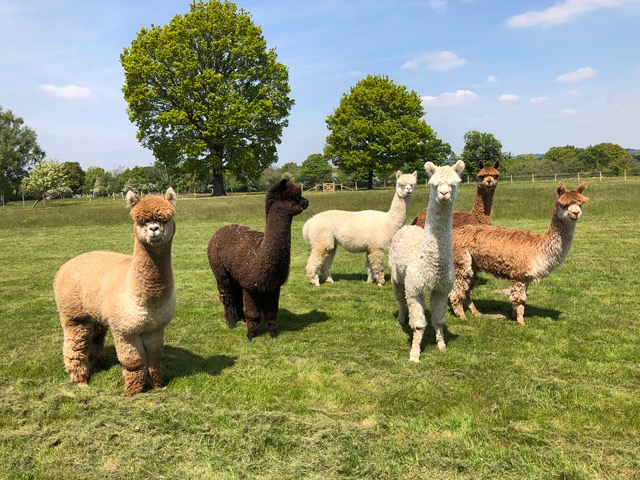 It was more than ten years ago when I first met alpacas. I was working at the Royal Melbourne Show in Victoria, Australia and one of my jobs was to write a daily newsletter during the period of Melbourne’s hugely popular and iconic annual community event. Run by the Royal Agricultural Society of Victoria it showcased the livestock and produce from the region along with fairground attractions, craft stalls and performances. The newsletter was for all the exhibitors involved in the Show.

Early one morning, as I walked around looking for ideas, I wandered into the enormous agricultural hall where all the livestock were in pens waiting for their moment in the showground. I came round the corner to be faced with the most gorgeous and unusual looking creatures I’d ever seen – Alpacas. I don’t remember thinking then that I must own some but I do know that from then on I have always been fascinated, and on returning to live in the UK in 2011, I treated myself to a trip to an Alpaca farm to spend a weekend with them and I think then had the dream. Work and commitments meant nothing could be progressed until now, when my Alpaca dream has finally come true and we have six of these charming, inquisitive, attractive creatures roaming our paddock and happily munching our grass.

Alpacas are camelids, indigenous to the High Andes Mountains (Altiplano) in the southern part of Peru, northern Chile, northern bolivia and Equador. Their domestication dates to 4,000/5,000 BC and later in the 15thCentury the Incas engaged in an active breeding program to provide fleeces with pure colours.

The global alpaca population nowadays is believed to be around 3 million. The majority of are still found in Peru, Chile and Bolivia and then there are alpaca farms in US, Canada, Australia, New Zealand and Europe, including our tiny little herd at Bewl Rookery.

There are two types of alpacas Huacaya and Suri. Worldwide, 94% of alpacas are Huacayas and only 6% are suris but we have 50%/50% in our herd of six. We bought our lovely group of three boys and three girls from  the wonderful Spring Farm Alpacas.

Huacayas have crimped fleece that grow perpendicular to their skin giving them a cuddly teddy bear look. The Suris are the reggae singers of the Alpaca world with dreadlocks that hang down and are very soft and curly. They may have originated

Living in a medieval landscape

Planting for the future