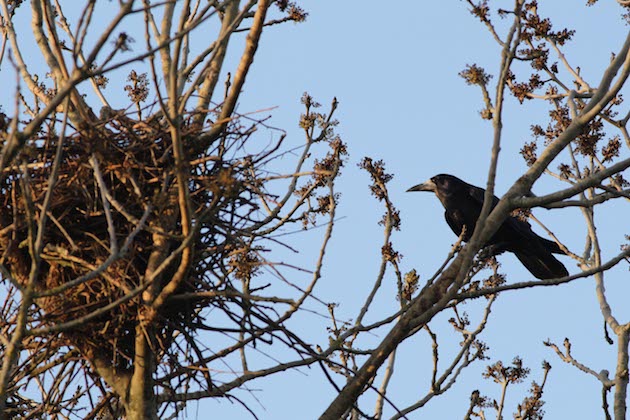 We named our B&B after the rookery opposite. The rooks gather in the trees on the edge of our field in the evenings on their way home to their nests, just across the road.

It is fun time to watch them return in separate little parties to the roost. The first party to arrive will not necessarily go straight to the roost but will play around in a nearby tree or field squabbling and chatting, discussing the day. They may not leave till other groups have arrived and sometimes well into dusk. The new arrivals chatter with those already there. It is played out in reverse in the morning. They disperse in separate groups, heading for their favoured foraging places.

Rooks are most sociable birds and pretty territorial. They do not migrate and seem to return to the same nesting spots year-after-year. A rookery may be occupied in much the same place for many years. The nests always look pretty haphazard and insecure perched up near the very top of the tallest trees; it always surprises me that even after an autumn gale the nests are still there and still quite intact.

This rookery, which my father has been watching since the turn of the century, is the largest near Bewl water, so we call it Bewl Rookery. There is another rookery in Chingley Wood at the very Eastern end of the reservoir that could claim to be nearer the reservoir, but it is remote and difficult to observe.

The nest positions do move a bit from year to year. They have nearly always been south of the B2100 and the number of nests ranges between twenty-seven back in 2002 to thirty-six more recently.

The rook is generally known as the farmers friend in that they destroy vast numbers of noxious insects and the mischief they do is probably more than compensated by this service. They are also a part of folklore with people believing they bring good luck. Some think you can foretell weather by their nesting behaviour. If they build nests high in the trees you can look forward to a fine summer and if the nests are low in the branches a summer of wind and rain. To me, the nests always look very high! (Perhaps since we moved here that shows there is global warming!).

A year in review